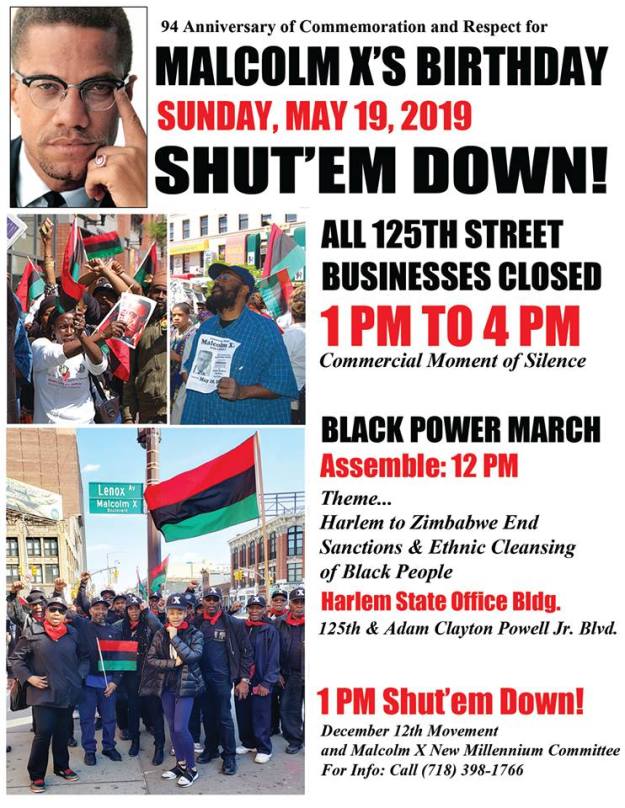 Wednesday May 8 is our final class meeting and we’ll spend the entire class on your presentations.

I will be on campus on Thursday the 16th for a final exam for my night class. email me to set up a time to meet to talk in the afternoon about the final paper if you want.

Final papers due by Monday May 20 as hard copies. You can drop them off at my English Dept  mailbox in Carman 302 anytime the building is open .

Remember to email your presentation to me by Monday. We’ll do all the presentations from my computer to keep things moving quickly. We may run until close to 9, but no later.

Presentation Order is as follows:

May 19 is Malcolm X’s birthday and celebrated by two important community-wide events.

First, there’s an annual pilgrimage to his gravesite at Ferncliff Cemetery that’s organized by the Sons and Daughters of Afrika and the Malcolm X Commemoration Committee. There’s a powerful ceremony at the grave. Buses leave from the State Office Building in Harlem at 9:45 AM sharp (Loading starts @ 9:30)! They return around 2:30 PM. There’s a small donation. Details TBA, but just show up.

Later in the day, the December 12th Movement holds a rally at the same State Office Building at 12 noon and then a march across 125th St to close local businesses in observance of Malcolm’s birthday from 1-4 PM. Details at their website.

The Brooklyn Academy of Music’s annual DanceAfrica street fair returns on Memorial Day weekend: from May 25-27 this year. Vendors with African clothing, crafts, and (hopefully) books and DVDs line the streets. It’s a good opportunity to get some things you need, buy some gifts and practice Ujamaa (cooperative economics). There’s no admission and it’s a good way to unwind after the stress of finals!

The 50th annual International African Arts Festival returns to Brooklyn’s Commodore Barry Park (near downtown Brooklyn) over July 4 weekend: July 4-7 this year. Admission is a suggested donation of only $5 per day and gets you access to dozens of vendors and daily/nightly performances, including some children’s-specific programming. Thanks to our own Christine, whose work with them this semester helped the event move forward! Details at their website.

This site uses Akismet to reduce spam. Learn how your comment data is processed.